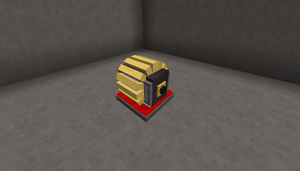 "The alternating current (AC) engine, like its DC cousin, requires a redstone signal to perform. However, this one needs an alternating signal, best supplied with a redstone clock. Faster cycle times correlate to more consistent power output, with 2-clocks providing a constant supply of 512 Nm at 256 rad/s (131.072kW). This engine requires a magnetized shaft core, which will gradually de-magnetize."

The AC Electric Engine requires a magnetized shaft core and an alternating redstone signal to output power equivalent to two Gasoline Engines. The core will demagnetize at a very slow rate. The redstone requirement can be fufilled by using any redstone clock available from other mods or by vanilla means, or by utilizing a Redstone Clock from Expanded Redstone.

There are no dangers associated with this engine, however if the player has a magnetized shaft core in their inventory in a short proximity of one of these engines, it will interfere with its ability to function as expected. This is only a temporary effect and the engine will function as normal as soon as player becomes out of reach or removes the core from their inventory.

Retrieved from "https://reikasminecraft.fandom.com/wiki/AC_Electric_Engine?oldid=1001"
Community content is available under CC-BY-SA unless otherwise noted.